The Club advocates responsible gambling and has established an extensive range of measures under its Responsible Gambling Policy (RGP). The Club has stringent underage access controls across all betting channels. Betting account applications are closely scrutinised and credit betting is not allowed. All of the Club’s front-line betting staff receive both initial and refresher training to ensure they can implement the RGP policy effectively.

In addition, the Club is the major contributor to the Ping Wo Fund, which was established in 2003 to support public education programmes and to provide gambling counselling and treatment services. In 2015/16, the Club more than doubled its contributions to the Ping Wo Fund, from HK$20 million a year to HK$45 million. Starting from July 2019, the Club has extended funding for a further four years, contributing HK$45 million per year. To date the Club has provided more than HK$400 million in funding.

The Club’s support for responsible gambling is widely recognised. In 2011, it was granted Level 4 accreditation, the highest possible, under the Responsible Gambling Framework of the World Lottery Association (WLA). This was renewed in 2015 and 2018. The Club is the first operator in Asia to receive this recognition three times in succession.

The Club is committed to preventing its operations from being used for money laundering and has put in place an anti-money laundering policy and framework, which makes reference to the internationally recognised Financial Action Task Force recommendations and industry best practice.

The Club remains constantly alert to the dangers posed by illegal gambling operators, particularly their growing use of online and other technologies to target the most vulnerable members of society. The Club will continue to work with Government and law enforcement agencies to tackle such operators, and to ensure that those who choose to gamble can do so in a lawful and properly regulated environment. 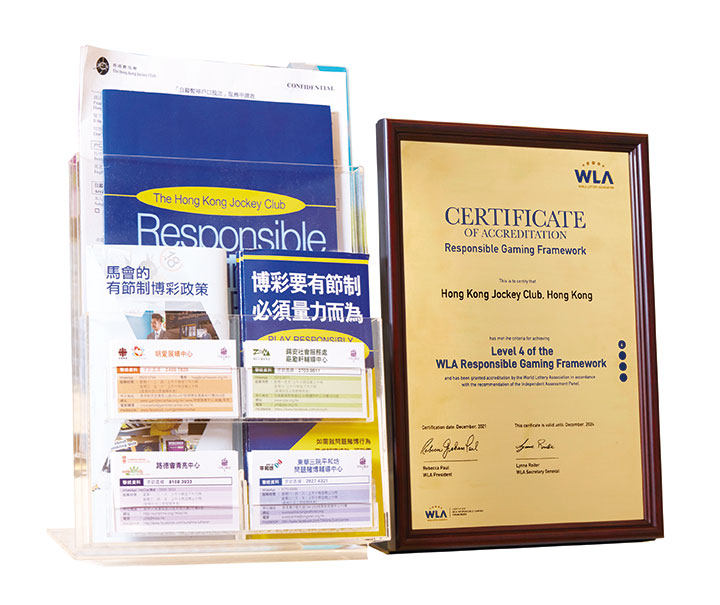