The pandemic that has hit Hong Kong in recent months has resulted in the cancellation or postponement of many football games and activities, yet football development has not come to a halt. The Hong Kong Jockey Club, in conjunction with Manchester United and the Hong Kong Football Association (HKFA), recently organised The Hong Kong Jockey Club Pass-It-On Continuous Coach Education Webinar Session for Hong Kong football coaches. Invited to speak about the concepts and methodologies to over 170 local coaches were John Peacock, world-renowned coach training expert; Nick Cox, Head of Manchester United Academy, and various professionals from the Manchester United Academy. A range of topics were covered, including how to maintain good relationships with players during the shutdown period so that they will be well prepared when training resumes.

Youth football training is about nurturing players to be better people

The online course had four sessions. Nick Cox, Head of Manchester United Academy, hosted the kick-off session with a talk on distance learning and training, and he shared how the Academy’s staff apply technology to keep the youngsters’ motivated during the shutdown. He said: “Self-discipline is really critical if the kids want to pursuit their football dreams. The top players can focus on their daily routine – working hard is one of the elements, but self-control from distractions would lead them to success.”

Although the players do not get to meet each other on the pitch like they used to, their relationships have not grown apart. “We would ask the kids to speak Spanish or other languages with their teammates, Cox explained. “They found it interesting; and through that, they would not only be learning something new, but they would also be sharing their lives with each other, which helps them to develop in the social perspective.” He added that the philosophy of the Manchester United Academy is to teach them to be a good people, not just to foster stars. “There might only be one Premium player out of a hundred kids. We are not only coaching that one player, but also the rest of them. Through football trainings, we help them to develop as a whole and to become a better person after their academy lives.”

The second session was conducted by Daniel Ransom, a psychologist at the Manchester United Academy. He pointed out that the most important thing to pay attention to in youth training is the psychological changes that occur during adolescence. For example, players may show disrespect as they suppose they know everything during that stage. The coaches also need to be psychologically prepared because adolescence is a long process and we cannot guide players in only a short period of time. The coaches also need to make sure that the players understand that these are inevitable processes and that they are mentally well-prepared to face setbacks and defeat. They need to get over losses fast so that they can continue to pursue their football dreams.

Ransom said: “Coaches have to be aware of the differences in their players on and off the pitch. If he didn’t work hard as much as before, you need to be considerate. He could be having a difficult time with family, friends or others. Kids in the adolescence stage are very sensitive and we should try to give them a bit more care, and to help them when needed.”

Injury is not the end of the world

In the third session, two Manchester United Academy fitness coaches, Mark Hulse and Luke Lawrence, discussed how to identify a player's talent and potential. What local coaches wanted to know more about was how to tell if a player is a late bloomer or really just an average player. Hulse admitted that this is not an easy job even if you are a good coach and scout. He also disclosed that the number of years of training should be taken into account when judging how talented a player is. For example, if two players are both 14 years old, but one has been training for three years while the other has been training for only one year, the player with one year of training has more untapped potential waiting to be discovered than the other. In addition, injuries are also a common problem for players. “A year of recovery could be critical for a player who is in his peak,” he explained. “For teens, they would have a career of 15 or even 20 years ahead, so to be injured for months or even a year is comparatively a short period in their long football journey.”

Peacock praised the local coaches for their enthusiasm

John Peacock, consultant at the Manchester United Academy, had joined the first three sessions before he conducted the last session of the technical and tactical training. He gave a number of examples from Premier League and European League matches to illustrate how to design a training session that is as close to the real situation as possible in daily practice, as well as how to link the training to the match in order to enhance the players’ ability to cope with situations on the field.

Peacock said: “We have to know why we are setting up the training, and how to evaluate its effectiveness afterwards. If it is not what you expected, make changes to improve it.” Peacock also appreciated how the local coaches had striven for improvement even when training fields were closed. He quoted Don Howe, former English national team manager, as saying: “Players are improving at an incredible rate. Are you (the coaches) striving to improve and develop as quickly? Are you worthy of coaching outstanding players? I’ve got to keep learning to try and keep up.”

The HKJC Pass-It-On Continuous Coach Education Webinar Session marked the first time the Manchester United Academy had organised an online coaching programme for overseas coaches. Cox described it as a great success; and he was delighted to see the enthusiastic participation of Hong Kong coaches. Both he and Peacock believe that their enthusiasm will make Hong Kong football even better.

One of the participants, Daniel Tong, said that the course exceeded his expectations: “I learnt a lot of things that are relatively unexplored in Hong Kong; for example, in addition to coaching the players, we also need to have very close communication with their parents. Manchester United are way ahead of us in these areas, and I have gained a lot of insight through this online course.”

Another school coach, Dorcas Lee, also felt that the course was very beneficial. “Actually, the online course is a very good medium,” she explained. “In the past, we used to conduct post-match reviews with the players on the pitch, but we may consider an online session in the future to save time.”

Football is a physical sport, and face-to-face communication is the best way to interact. With the advent of technology and the rise of online conferencing, online communication can break through the limitation of not being able to communicate face-to-face. As Peacock said: “This is the second-best option.” As long as Hong Kong coaches can maintain their enthusiasm for continuous improvement, the development of Hong Kong football will continue to grow steadily. 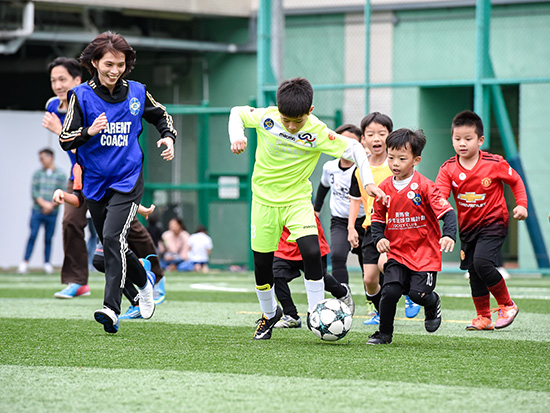 Progressing together as a family in pursuit of football dreams 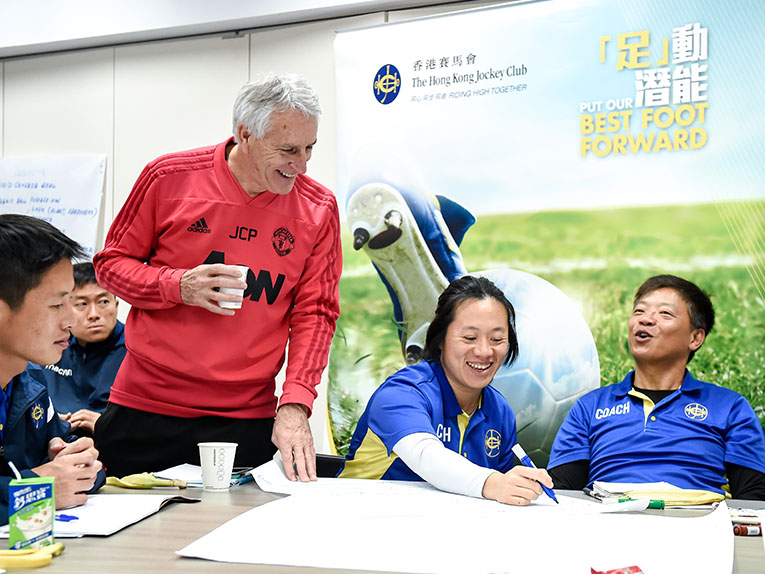 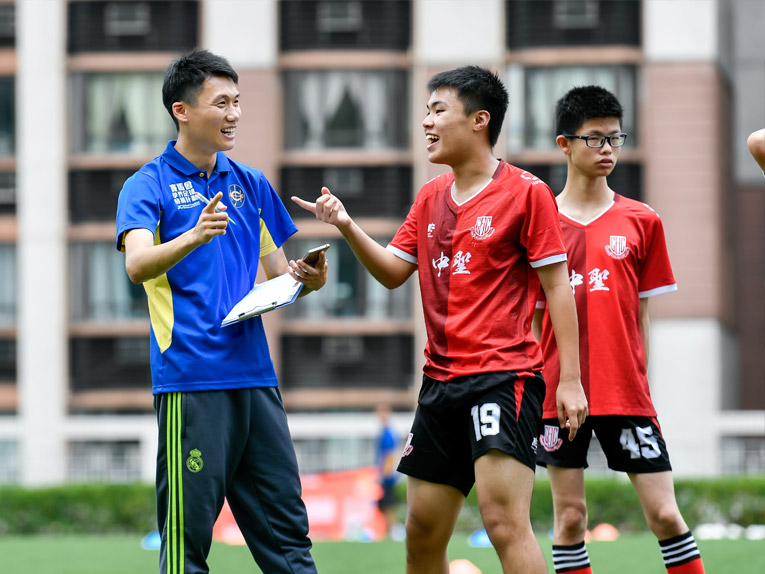 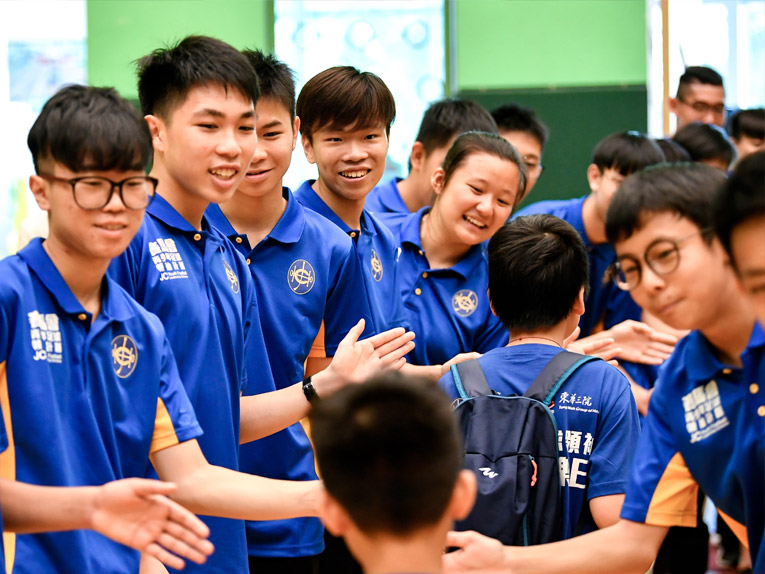