Ap Lei Chau was ranked as the world’s second most densely populated island by Guinness World Records in 2018. Aplichau Kaifong School, with a history of 66 years, is located next to Lee Tung Estate. Ho Hei-yin (Ho Sir), a young teacher and football coach at the school, said that they only have a few students playing football at the school, and they also face the challenges of a lack of playground area and resources. Ho, who joined the JC School Football Development Scheme this year, recently sat down with us and shared his thoughts.

We first met Ho Sir during the selection stage of the Scheme last summer, and now we went to his school to catch up with the 26-year-old. An open-minded person, Ho Sir was often seen talking and laughing during the Scheme’s practice classes; however, at school, he put aside his sense of humor and carefully explained to us his reasons for joining the Scheme: “In many other schools, they can ‘select’ the best players. However, at our school, we wish to focus on youth development by recruiting junior students who are interested in football, and then help them to explore more and ignite their passion for this sport.”

This is the second year that Ho Sir has taught at the school, and he is working with a freelance coach to manage and train the football team. Ho Sir explained that the students come from different backgrounds. He also openly admitted that he doesn’t care too much about their academic performance and standard at this stage but hopes that football can help to improve their abilities and self-confidence, as they play and learn from kids of a similar age. However, he has found that some of the players do not fully engage in what they are doing and behave quite frivolously. He told us with an embarrassed smile: “I’ve had students ask me in the middle of a game what they were going to eat afterwards. They don’t care about the game result. Indeed, I don’t either, but I do care about their attitude, and I hope that they enjoy the match. My thought is that if you don’t have the heart to do something, how can you do it well?”

A worried heart – changing the attitudes of parents and students

We left the classroom and Ho Sir led us up two floors to the rooftop basketball court. This is the one and only training field for the school football team. Ho Sir told us that they need to share this playground with other extracurricular activities, and that the football team can train here only twice a week. If they want to train more, they need to leave the campus. However, there are only a few public playgrounds and schools in Ap Lei Chau.

Ho Sir explained that the second challenge is the support of parents. “Parents once requested to help the team by providing support to their kids during some tournaments, which could certainly boost the team’s morale. However, when I suggested that students participate in professional, systematic training and tournaments in places such as Wong Chuk Hang, the district just next to Ap Lei Chau, they were not very supportive because they are busy with work and don’t have time to bring their children. I think by joining the Scheme, I can change their minds.”

Ho Sir admits that he has put a lot of time and effort into collecting promotional leaflets for interschool district competitions and encouraging students to take part, as well as lobbying their parents for support so that they will allow their kids play football more regularly. However, the results have not been so encouraging. Last year, they joined an interschool competition arranged by Joseph Ng Ka-wai – a Caritas Chong Yuet Ming Secondary School teacher who joined the 4th JC School Football Development Scheme – and played in two ten-minute games. That was a very valuable experience!

As the old saying goes: the mind sets the realm of possibilities. Ho Sir stressed that anything is possible if the mind is strong. During the school visit day, Christopher O’Brien (OB), Manchester United Soccer Schools Hong Kong Head Coach, led a training session that the students were very excited about. Ho Sir assisted and observed OB interacting with the students, and he discovered OB’s key to success – OB could read their minds. “Not all of our kids are good at English,” Ho Sir explained. “However, they really pay attention to what OB says, and they try their best to answer his questions. OB doesn’t care about their skills; he simply asks them to concentrate and get involved. It is important for students to feel valued.”

Ho Sir also noticed that the set-up of the training field is also important. “OB makes good use of the time and space,” he said. “And he makes sure that every student uses their feet to play with the ball. That makes them naturally focus on the training.”

“Ho Sir, let me help you pump up the balls! And when will be our next practice?” Before practice was suspended and prior to Ho Sir joining the Scheme, these were things that the students had never asked before. Ho Sir felt comforted about that, saying: “Too many unexpected things have happened in the past year – class suspensions and the ban on extracurricular activities until the end of the school year – but at least I can see the light at the end of the tunnel. Understanding what the students are thinking is what I learnt from OB. I hope I can start on campus and expand the number of football players.”

In fact, it is also important to work together with others, instead of only counting on one’s own efforts. Ho Sir said: “Students need to show their determination for playing football, and I also need to show the same determination and patience when trying to convince parents to support their children’s participation and involvement. It is a huge motivation to know that parents are willing to understand their children’s needs and interests, and show their support. I am looking forward to their support and to them being there to witness as I lead the team in games with other schools in the Scheme that take place outside of Ap Lei Chau.”
When we were about to leave the school after the interview was finished, Ho Sir took a final chance to tell the parents: “Take some time to watch our activities and training sessions in the future. You may have a different experience when you see how happily and focused your children are when playing football!”

A heart full of original intent – Letting the youngsters grow

Because of the pandemic, the school year has been cut short. To accommodate the new restrictions, the teachers and coaches can continue to attend the Scheme’s webinar courses. This can help them to keep on studying and applying what they have learnt in future so as to develop the young players’ psychological, physical and sociable attributes through football training.

So, let’s put our best foot forward, and ride high together! 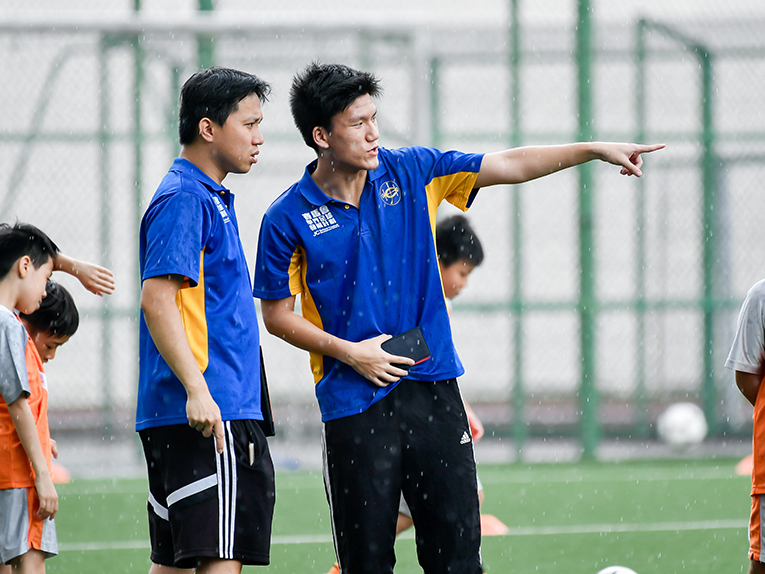 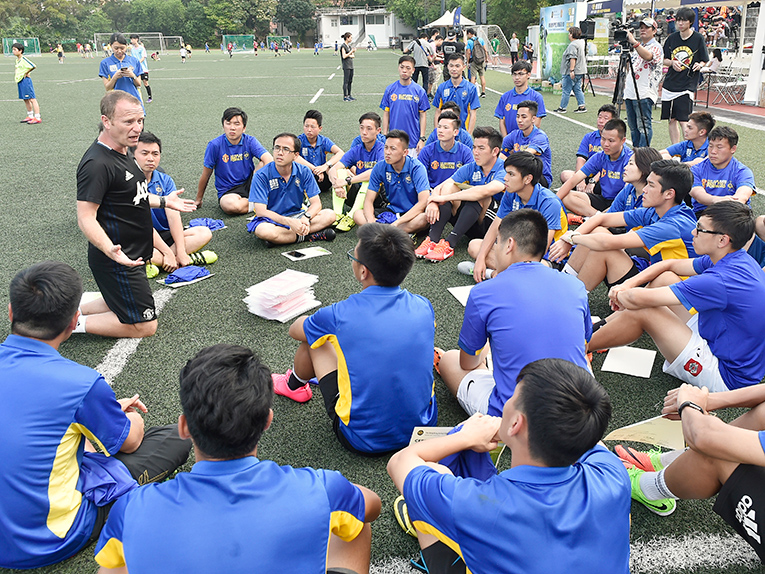 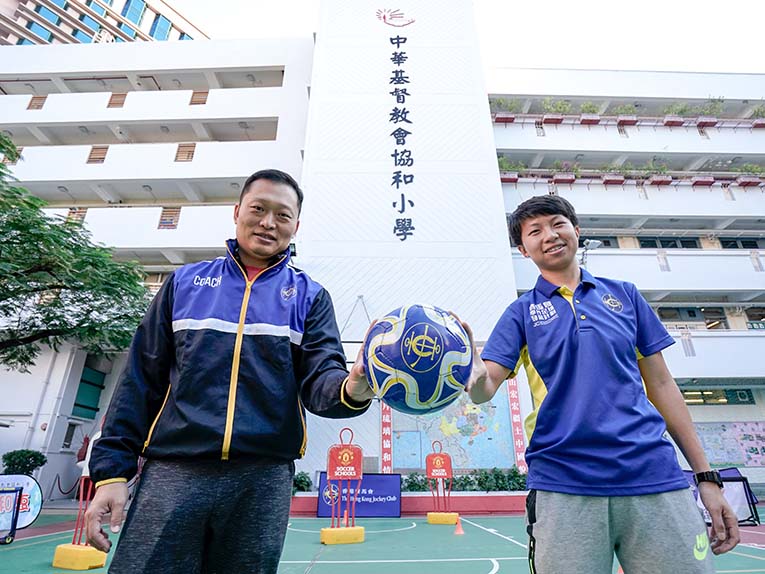 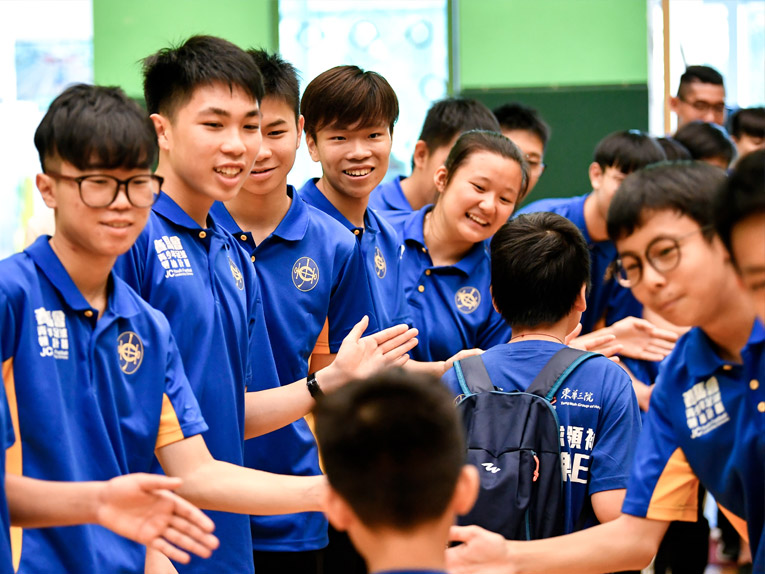 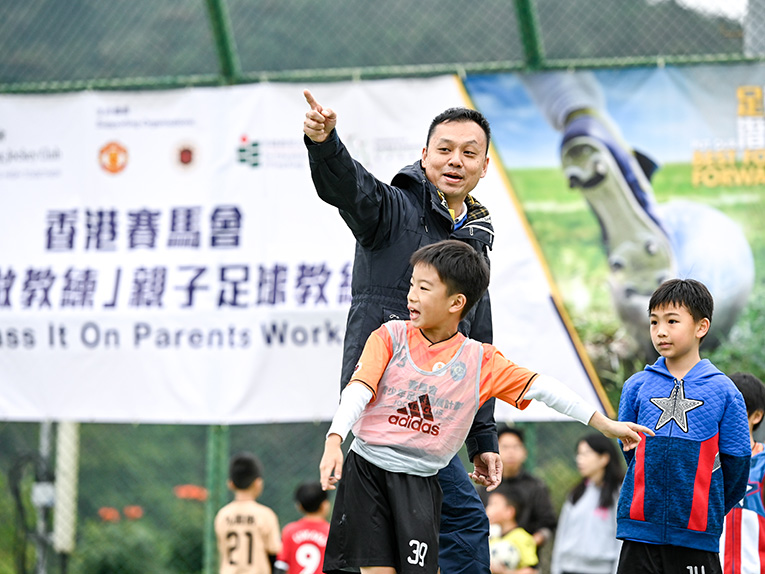